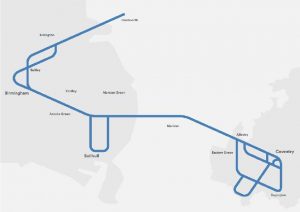 Autonomous vehicles will be trialled along the Midlands Future Mobility route, the route has been developed by TfWM in collaboration with Coventry City Council, Birmingham City Council and Solihull Council and provides over 300km of inner city, suburban and rural roads from Coventry to Birmingham, on which to fully assess vehicle performance in a wide range of real world locations and situations.

The first types of vehicle to be trialled along the route will be “connected” vehicles.  Connected vehicles can ‘talk’ to each other and warn of traffic, crashes and other hazards that other connected vehicles may have seen or be heading towards.
The vehicles on the Midlands Future Mobility route will not be driving themselves during the early stages of research, initially they will have a driver and occasionally a second person monitoring how the vehicles are working.

The route itself causes no disruption to drivers or the homes along it, as it uses existing road infrastructure 95% of the time.

Phase one of the route includes the University of Warwick, Coventry ring road, roads in Meriden, Solihull and central Birmingham around the Jewellery Quarter.
Project consortium member Costain and contractor Siemens Mobility have begun work on the route, which will officially open for trials later this year.

“It is great to see that work has begun in making roads a more connected place, where drivers can make their journeys more safely and where goods can be delivered more efficiently.

“The West Midlands has a rich history of the automotive industry, and to see it is now progressing into Autonomous vehicles feels somewhat momentous.”

“Connected and autonomous vehicle technology has the potential to radically change our lives, and I am pleased the West Midland is leading the way in this sector with research facilities and production plants already in place.

“I am determined our region will become a global leader in electric and autonomous vehicle technology, as I know we have the skills, facilities, and drive to compete with any other city or region in the world.”

“This world-class testing environment is another fantastic asset to the West Midlands’ portfolio of projects, programmes and facilities tailored towards developing the next generation of transport technologies.
“The current global health crisis has highlighted the urgent need to accelerate R&D in future mobility on a national and international scale. Our status as the UK’s first Future Mobility Zone, coupled with our reputation for transport innovation and collaborative industry-academic partnerships, puts us in a unique position to lead the UK’s ambitions for the sector.”